Trademark designs often consist of similar design elements like square and round frames, and badges to elevate the fame of trademarks and to impress the consumer. However, when determining whether a likelihood of confusion exists, it depends on if consumers can identify the source of goods and services through the distinguishing parts of trademarks, instead of similar designing elements adopted in the trademarks. In such circumstance, the classification of “design element” and “distinguishing part” in a trademark would be an important legal issue. Reiwa 1st year (2021) Gyo-Ke No. 10170 Judgement1 made by the Japan Intellectual Property High Court aims to clarify the determination of graphical and word elements of the trademark.

Bull Pulu Corporation (“Bull Pulu”) is a beverage chain in Japan who registered the trademark “Bull Pulu TAPIOCA” (“the Contested Trademark”) at the Japan Patent Office (“JPO”) on March 9th, 2016, and the application was approved on December 9th, 2016.

Starbucks then filed the suit for cancelling the JPO decision before the Japan Intellectual Property High Court. The court found that the two trademarks are not similar and maintained the decision made by JPO. 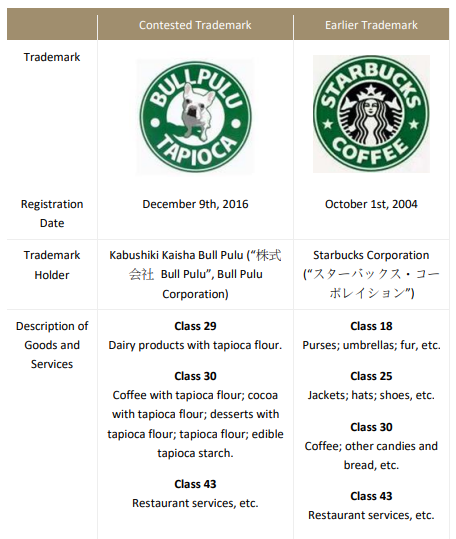 Starbucks claimed that the Cited Trademark and its green outer ring had already been famous before the application date of the Contested Trademark. According to the result of a consumer survey provided by Starbucks, more than 80% of the respondents associated the green outer ring and white words ( “

However, the court did not agree with Starbuck’s argument. The court’s reasoning is summarized below:

When comparing the design elements of both trademarks, they both have a green outer ring, a graphic element encircled by the ring, and white words on the ring. There seems to be imitation in the design of the Contested Trademark. Therefore, Starbucks claimed that a likelihood of confusion exists between the two trademarks, and the Contested Trademark should be revoked.

In Japan, the distinctiveness of trademark relies on consumers’ perception instead of the designing elements in the trademarks. This is further proven by the statutory basis for a refusal to register due to likelihood of confusion:

(1) Trademark that is identical with, or similar to, another person’s registered trademark which has been filed prior to the filing date of an application (Subparagraph (XI), Paragraph (1), Article 4, Japan Trademark Act); and

(2) Trademark that is likely to cause confusion in connection with the goods or services pertaining to a business of another person (Subparagraph (XV), Paragraph (1), Article 4, Japan Trademark Act).

For all the reasons above, the Japan Intellectual Property High Court pointed out clearly in this judgement that, first, even though both trademarks contain a green outer ring, the ring itself is nothing more than a design element which cannot be independently identified by the consumers. Second, consumers can identify the sources of goods of both trademarks through recognizing the main distinguishing part “BULLPULU” of the Contested Trademark and “STARBUCKS” of the Earlier Trademark. Thus, the Earlier Trademark does not constitute the basis for a refusal to register the Contested Trademark under the Japan Trademark Act.