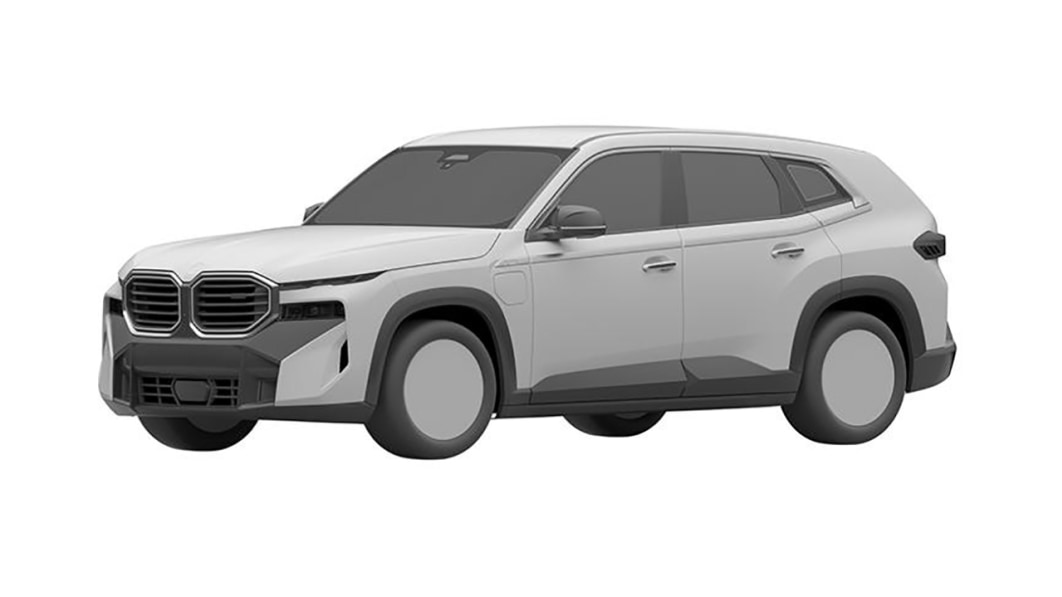 BMW has submitted low-res renderings of the coming XM SUV to Japan’s patent office. The iX forum discovered them, putting the coming production SUV from BMW’s M division into a thread with patent images of the Concept XM that debuted late last year. There are a few changes, as one would expect. Still, it’s clear from the version headed to showrooms that BMW is standing behind its bet on the XM’s design. The most visceral change has been made to the front fascia. Instead of the squinting lights and all-grille-all-the-time mien of the Concept XM, the retail model features smaller kidneys that appear a touch shorter and wider than the grille on the new X7, framed by the kind of dark and chrome trim we’re more used to. The vibe is far more X6 than X7, which makes sense, this being the sporty take on a crossover. Below the grille, a new lower intake features the obligatory sensor array. At the corners, the former serrated headlight housing is replaced the stacked units similar to the i7 and X7.

About the only change along the flanks is the switch to regular door handles, eliminating the flush units on the concept. More’s been done in back, the concept’s slashing lines for taillights swapped for housings more like those on the X6. Looks like the rear glass has been enlarged a bit, a welcome revision for any driver. The concept’s diffuser-heavy rear bumper is more civilized, and the hexagonal tailpipes are angled on the new patent images.

There are still competing ideas about how many power options we’re going to get. BMW told us of one plug-in hybrid powertrain with 740 horsepower and 738 pound-feet of torque going to all four wheels. It will come from a V8 hybrid system built around the new S68 4.4-liter twin-turbo V8, with an e-motor set in the eight-speed automatic transmission. Thanks to the plug on the left front fender, a 25-kWh battery and that e-motor will be able to power anywhere from 30 to 50 miles of pure EV driving depending on market. Some have the idea that this guise will be the top trim, maybe wearing the Competition or Black Label monikers. Auto Express, which has ridden in a prototype, said there’ll be a version with a total output of 644 hp and 590 lb-ft., which Motor1 believes will be named something like XM 50e, after the standard used for the 7 Series M Performance PHEV.

It’s not clear which one will come first. Though, since BMW has officially spoken of the 740-hp version, we won’t be surprised if that one makes the splash. The unveiling is expected this year, but market launch might not come until next spring.