From 1959 to the present, the Japanese Trademark Law has been revised for several times to expand the scope of protection, as described below.

IP High Court decisions on registrability of new types of trademarks have been accumulating in recent years. For example, if we focus on the registrability of position marks among them, we can see the following rulings in 2020. 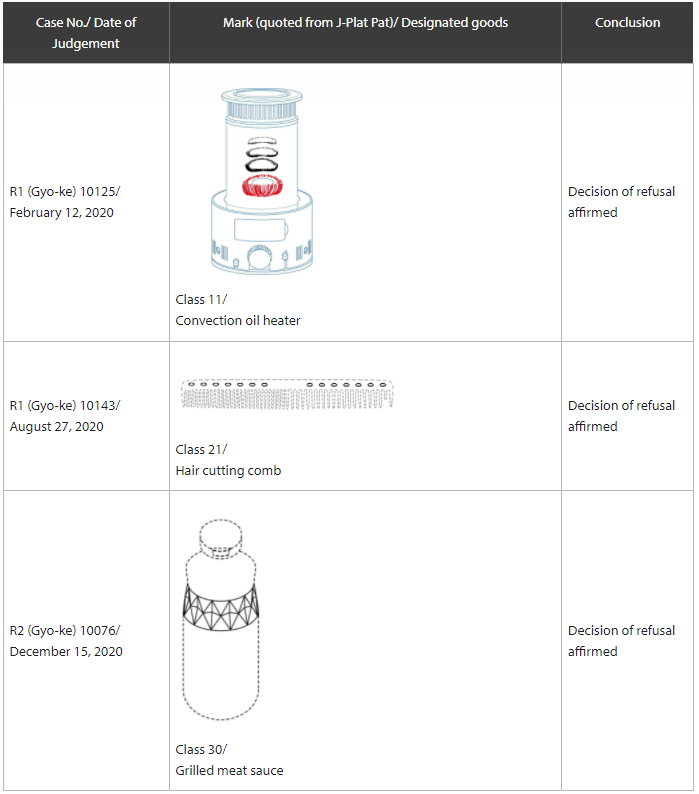 The following is a summary of the most recent judgement on a position mark for a grilled meat sauce which is most popular in Japan.

2. Background of the case

The contested position mark is a three-dimensional pattern on a bottle of grilled meat sauce. The appeal board of the Japan Patent Office rejected the application on the grounds that it was not distinctive under Art. 3, Sec. 1 (iii) of the Trademark Law. The suit was brought to revoke the appeal decision.

Detailed description of the trademark:

This is a position mark in which the position of the mark is specified. The mark consists of a three-dimensional shape arranged from slightly above the center of the body of a bottle to the neck. The three-dimensional shape is a set of vertical rhombuses arranged continuously around the periphery of the bottle, and each rhombus shape is depressed toward the center. The dashed lines show an example of a product bottle and is not a component of the trademark.

The court discussed on the following two issues in this case.

Whether the rhombus-shaped mark of the present application meets the requirements of Art. 3, Sec. 1(iii) of the Trademark Law and can function as a sign to identify goods from a certain origin. (i.e., is the rhombus pattern a trademark or a mere design?)

Whether the mark has acquired distinctiveness through its use under Art. 3, Sec. 2 of the Trademark law. (i.e., has the rhombus shape alone come to be recognized by consumers as a distinctive sign of origin?)

The plaintiff argued that the three-dimensional multifaceted pattern is a very special shape and cannot be adopted by everyone. Therefore, the shape and its position can function as a distinguishing mark.

However, based on the evidentiary materials submitted by the defendant (JPO), the court held that the continuous vertical rhombus shape consists solely of a mark indicating shape of the packaging used in a common manner. More specific reasons are as follows:

First, the court provided the following legal norms based on past court decisions on position marks as to how they should be judged.

Whether or not a position mark consisting of a three-dimensional shape has acquired distinctiveness through use should be judged by comprehensively taking into consideration the shape of the mark, the period and area of use, the quantity of goods sold with the mark, the period and scale of advertising, and whether or not there are any other goods with a shape similar to the shape of the mark.

After clarifying the above, each individual criterion for judgment was determined as follows. 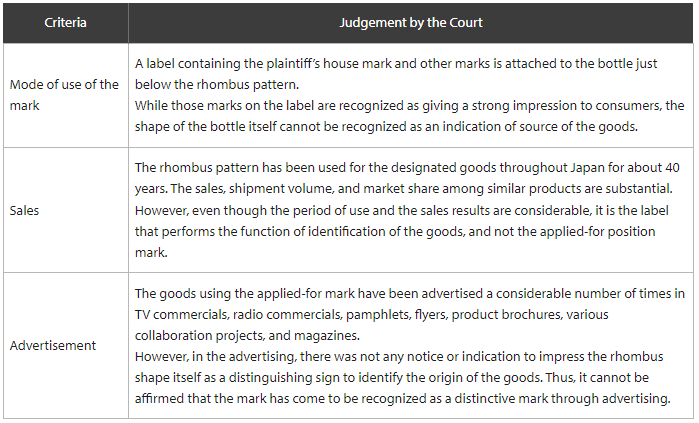 In addition, the plaintiff conducted a consumer questionnaire survey and submitted the results thereof as evidence to show how widely this position mark is recognized by consumers and how it has acquired a high degree of distinctiveness.

However, the court did not consider the results because the questions were considered to be incomplete and insufficient to approve the distinctiveness of the position mark.

[Conclusion] Based on the above, the court concluded that the position mark in question did not have the inherent distinctiveness or the distinctiveness acquired through use. Thus, the decision of the JPO that the applied-for mark did not meet the requirements for registration was upheld.

(1) As for the possibility of success in registering three-dimensional trademarks that do not include any other distinctive elements such as words, letters or logos, it is not an easy thing, as has been said in the past, in terms of both inherent distinctiveness and acquired distinctiveness through use. Therefore, we can understand from the above case that the hurdle is likely to become even higher for three-dimensional position marks, as they need to be distinctive only by a partial shape, not by the overall shape of the product or packaging.

(2) In terms of ease of registration, as long as it is novel, it is generally much easier for a shape of a packaging bottle, as in the above case, to be registered as a partial design under the Design Law than as a position mark.

However, protection by a design right was impossible for the present bottle due to lack of novelty since the actual product had been sold since 1978. In addition, at the time of its launch, the partial design registration system had not yet been introduced in Japan.

(3) Below are practical suggestions that we can learn from this case regarding position marks of three-dimensional shapes.

– First of all, it is desirable to file a design application for a characteristic shape of a product or a package while it is still novel, to have it registered, and to use it under the exclusive design right on a continuous basis. Then, if a trademark is applied for after the registered design has acquired the distinctiveness as a mark through continuous use of the design, there is a better chance of success in obtaining a trademark right for the position mark.

– When the court decides whether a trademark has acquired distinctiveness or not, the scale and duration of sales and advertising are fully taken into consideration. Furthermore, in the advertising of the products, it seems more advantageous to explicitly mention that the shape of the product or packaging is not a mere design but a mark to distinguish the product from others.

– To obtain the court’s positive affirmation to the results of the consumer questionnaire survey, the questionnaire must be carefully designed so that the court can see them completely fair and sufficiently reliable. If there is even the slightest doubt about the reliability of the questionnaire, the court will not adopt the survey even if it achieves a high recognition rate among consumers.