This report is based around several segments which include reports on IP trends and examinations, trials and appeals, and international initiatives, but also JPO support measures and recent law amendments. We hereby outline the principal takeaways from this report.

A. Newly filed patent applications in Japan continue to drop. 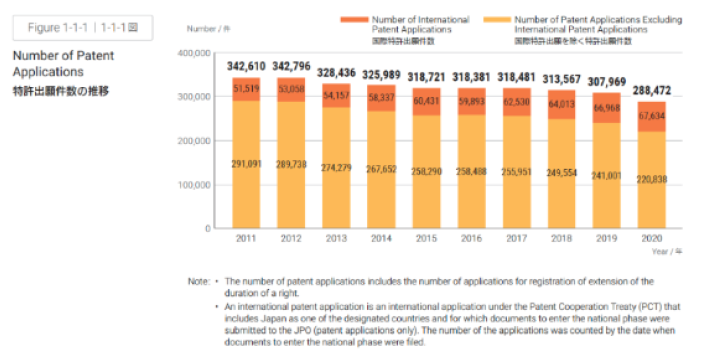 Patent applications led at the JPO decreased for the third time in a row, which symbolizes the crystallization of a trend which started back in 2001.

B. Slight increase in international patent applications in Japan.

A. The number of opposition proceedings in Japan remains stable with around 1,000 cases every year.

Five years after the reintroduction of oppositions, the number of led oppositions has stabilized at around 1,000 cases per year. We can observe that the number of oppositions led has substantially dropped compared to that under the old system, which saw an average of 4,450 cases led per year. The reason for this is believed to be a surprisingly low success rate of oppositions: in recent years, below 10% of opposed patents ended up being invalidated after opposition proceedings were concluded.

B. The number of led nullity actions slightly increased.

A slight increase can be noticed in the number of newly led Nullity Actions at the Japan Patent Office. Despite this small change, a general decreasing trend has been observed over the last couple of years. Indeed, 121 cases were led at the JPO in 2020, in contrast to 269 cases in 2011, which corresponds to a 55% drop. The reintroduction of the Opposition system, bringing a new way to invalidate a patent without identity disclosure, combined with a deterioration of success rate in nullity actions proceedings, play a signicant role in this overall trend. However the success rate of nullity actions was higher than ten years ago with 61.5% of disputed patents partly revoked in 2005 in contrast to 23.0% in 2019. As a result, given the high cost of invalidation proceedings, plaintiffs may be more reluctant to commit to a signicant investment due to the uncertainty of the outcome.

3.  Overview of IP Trends at the IP5 Offices

A. The number of newly led patent applications worldwide has stabilized. 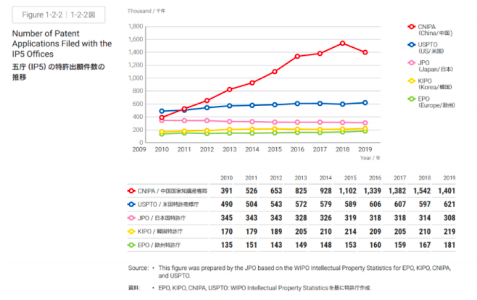 B. The number of registered patents worldwide continues to increase.

Similarly, the portion of registered patents continues to grow worldwide. The number of granted applications worldwide soared by 64.0% in nine years; 915,000 newly granted applications worldwide in 2010 and 1,501,000 in 2019. This signicant rise can be explained by the easing of patent requirements by Patent Offices as well as the increase in assistance to applicants through simplied proceedings. As an example, the number of registered patents has increased by 253% from 2010 to 2019 at the CNIPA, by 165.4% at the EPO, by 121.1% at the KIPO and by 112% at the USPTO during the same period. 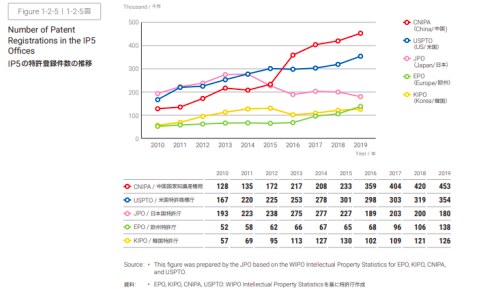