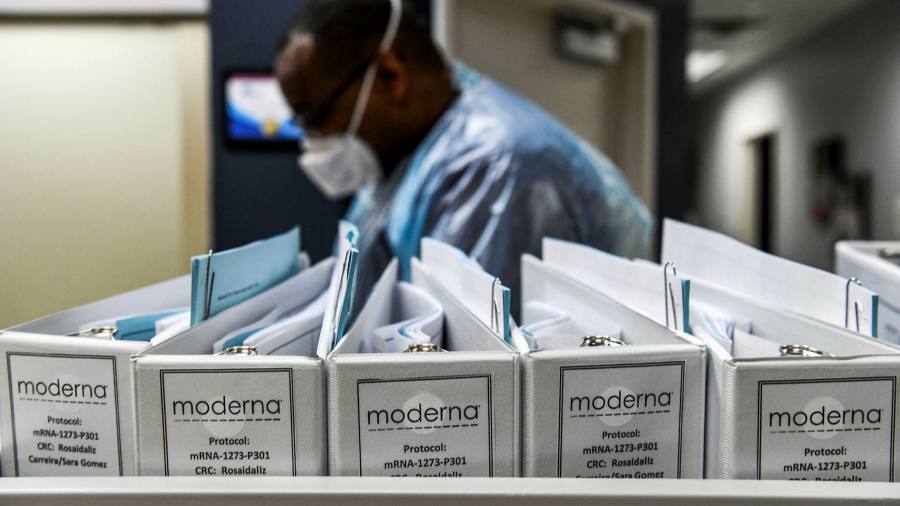 The US Department of Defense’s research arm is probing patents filed by and awarded to Moderna, a US biotech company developing a Covid-19 vaccine, after researchers accused the company of failing to disclose government funding as it is required to do by federal law.

In a report published this week, researchers at Knowledge Ecology International (KEI), a patient advocacy group, said Moderna failed to disclose in its vaccine patents that it had received about $25m in grants from the DoD’s Defense Advanced Research Projects Agency, or Darpa, to develop its vaccine technology.

“It appears that all past and present Darpa awards to Moderna include the requirement to report the role of government-funding for related inventions,” Darpa spokesman Jared Adams said in an emailed response to the Financial Times.

“Further, Darpa is actively researching agency awards to Moderna to identify which patents and pending patents, if any at all, may be associated with Darpa support,” he said.

Mr Adams declined to comment further, saying the investigation was continuing. US federal law required government funding to be disclosed in these circumstances, he noted.

Disclosure of federal funding in patents helps establish how public funds are being used, and whether any royalties are being paid to the government, which is increasingly taking an interest in high-priced medicines that have been developed on the back of taxpayer money.

KEI examined the 126 patents assigned to Moderna as well as 154 patent applications. “Despite the evidence that multiple inventions were conceived in the course of research supported by the Darpa awards, not a single one of the patents or applications assigned to Moderna disclose US federal government funding,” KEI researcher Luis Gil Abinader wrote.

Video: Coronavirus: the global race for a vaccine | FT Interview

Jamie Love, the head of KEI, said that the lack of disclosure was “surprising,” particularly as some of the federal grants covered the technology Moderna hoped to harness in its Covid-19 vaccine.

“As surprising was the apparent lack of oversight by the government,” he added. KEI had written to Darpa on Thursday to request an investigation.

Moderna said it believed it had complied with applicable patent reporting requirements regarding patent filings, including those related to the Darpa programme.

Moderna is developing a vaccine with the backing of nearly $1bn from the US government, mainly from the Department of Health and Human Services’ Biomedical Advanced Research and Development Authority.

That vaccine, which uses the messenger-RNA, or mRNA technology, would be among the most expensive against Covid-19.

The FT reported in July that the company had been pitching its vaccine to potential buyers in the range of about $50 to $60 per two-dose course. The company has said it would price some of its jabs as high as $37 a dose, and disclosed a deal with the US for the supply of 100m doses worth $1.5bn. It is in talks with the EU and Japan over supply deals.

Some competitors’ vaccines are priced significantly lower, recent supply deals indicate. The vaccine being developed by AstraZeneca and the University of Oxford is priced at about $3 per dose, for example.

Moderna has disclosed having received government funding in investor filings with the Securities and Exchange Commission.